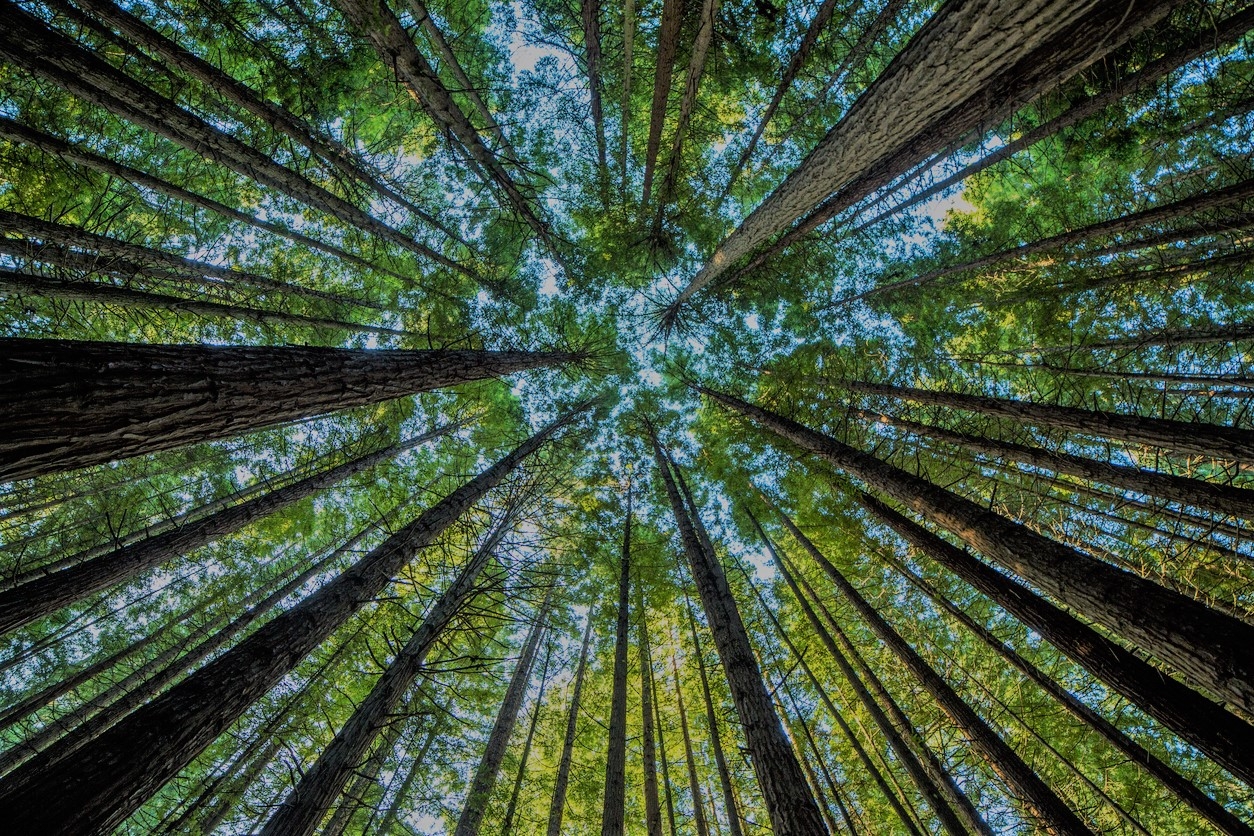 Our Environmental, Social and Governance activities, commitments and reports

2021 Report
ESG is central to who we are and how we serve our clients and communities.
How our company advances good in the world has always been important to us; and environmental, social and governance considerations have been a formal part of our decision-making since 2008. That ESG concerns are moving toward the center of corporate decision-making is good news for society. Our shared challenge is to bring an even greater urgency to advancing social equity, sustainability and accountability.
Kate Brennan, General Counsel and Chair, Management ESG Committee:
"We believe transparent and consistent disclosure enables better-informed business and investment decisions."
Accelerating Impact: 2021 ESG Report

We made progress against our 2021 climate commitments and have made new ones in 2022, including our intention to become net-zero across our operations globally by 2050.

We made progress against our 2021 climate commitments and have made new ones in 2022, including our intention to become net-zero across our operations globally by 2050. 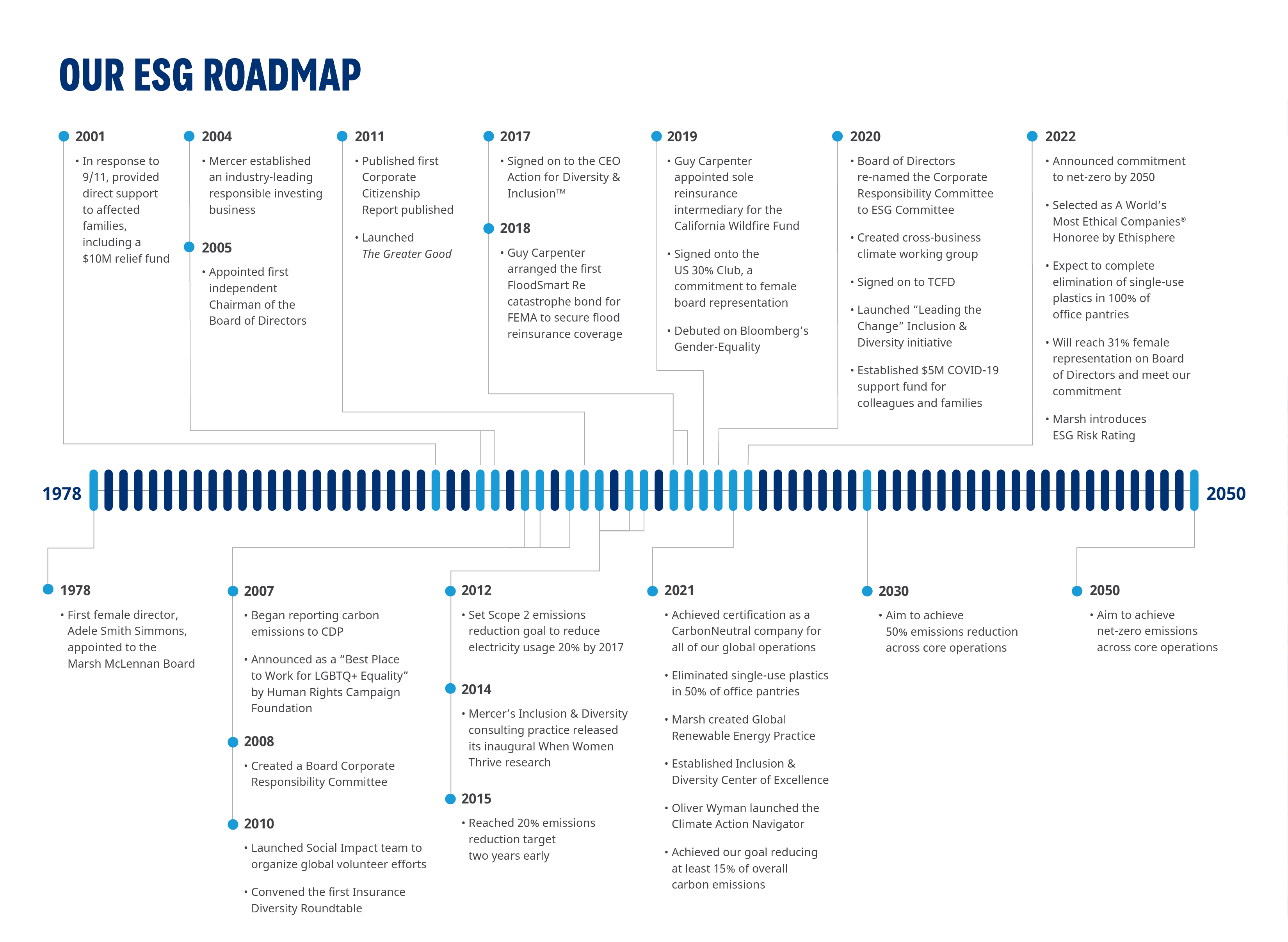 2020 was a year like no other, one that tested the world in unforeseen ways. At Marsh McLennan, it also reaffirmed a sense of purpose that goes far beyond commercial success.

2020 was a year like no other, one that tested the world in unforeseen ways. At Marsh McLennan, it also reaffirmed a sense of purpose that goes far beyond commercial success.

Explore 2020 Report
A note on corporate governance policies and reporting.
Our government relations activity is subject to our code of conduct and other rules that address interactions with public officials and corporate political contributions. Find related guidelines and ESG documents below.

Marsh McLennan does not use corporate funds for independent political expenditures in support of or opposition to any candidate for office. That prohibition also applies to payments made to trade associations. Each payment to a trade association is individually reviewed and subject to attestation, to ensure compliance with this prohibition.

Further, it is our policy that Marsh McLennan does not engage in the following kinds of political conduct:

• Communicating its view on specific candidates

Marsh McLennan Political Action Committee (PAC) is a non-partisan, US federal political action committee that receives voluntary contributions from Company employees. The Company's political action committee provides the Government Relations Department with important opportunities to build relationships with federal lawmakers. The PAC does not use corporate funds to make political contributions and operates with a loyal base of voluntary support from Marsh McLennan colleagues.

Marsh McLennan PAC is governed by an Advisory Committee, which administers the PAC’s budget over each two-year election cycle and oversees compliance with US federal election laws.

The PAC makes contributions with the approval of the Advisory Committee chairperson to federal candidates that are governed by a set of criteria and made transparent according to federal law and Company policy.

Marsh McLennan PAC contributes to candidates for federal office who:

• Support Marsh McLennan’s business interests and those of our clients.

• Serve on committees with jurisdiction over policies that are core to our interests.

• Serve in districts or states where our colleagues live and work, and

• Align with our Company's values as outlined in The Greater Good.

Marsh McLennan actively engages public officials at the federal and state levels on issues that impact our colleagues, businesses and clients. Marsh McLennan also retains outside consultants and lobbyists to advocate on our behalf.

In compliance with federal law, Marsh McLennan and its outside consultants file lobbying reports (LD-2) on a quarterly basis to disclose federal lobbying activities and expenses.

Sound corporate governance principles, acting with integrity and maintaining the trust of our shareholders are among our most important values and practices at Marsh McLennan. 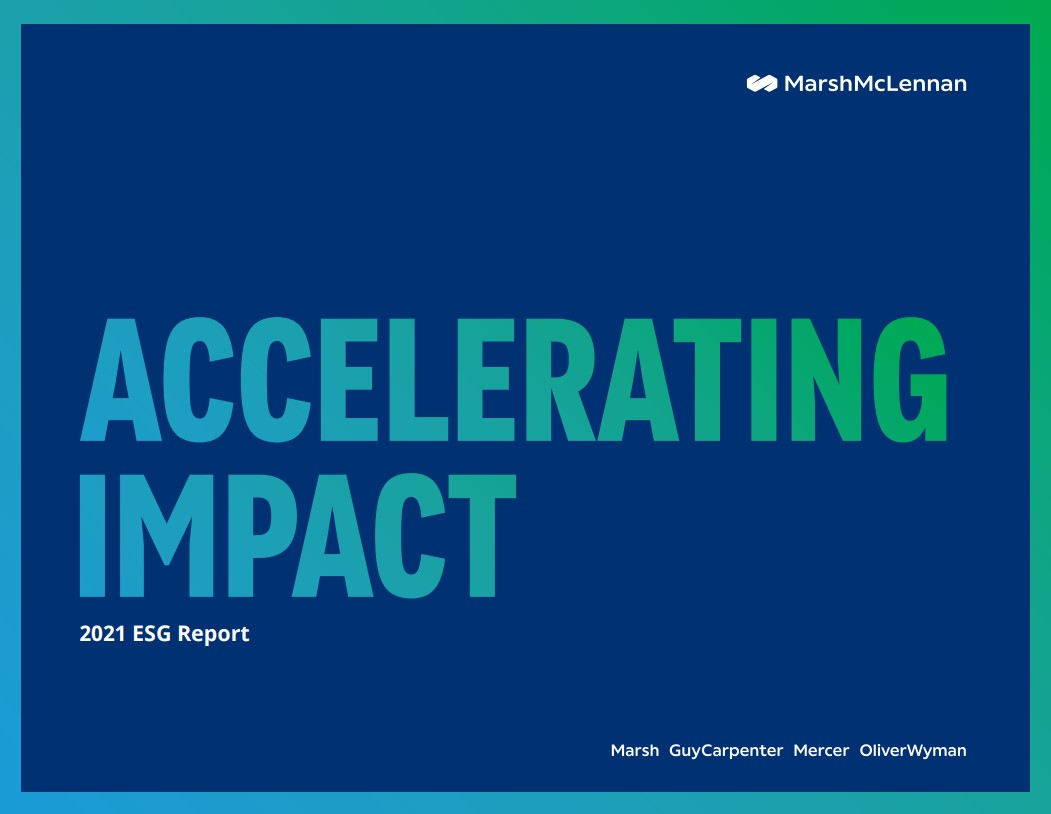 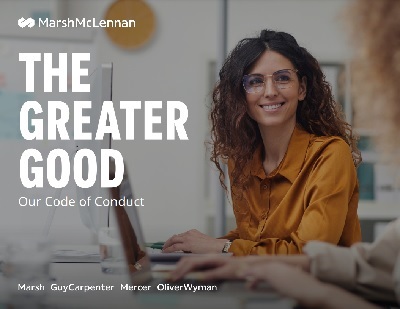 Our Code of Conduct - The Greater Good

Our Code of Conduct - The Greater Good