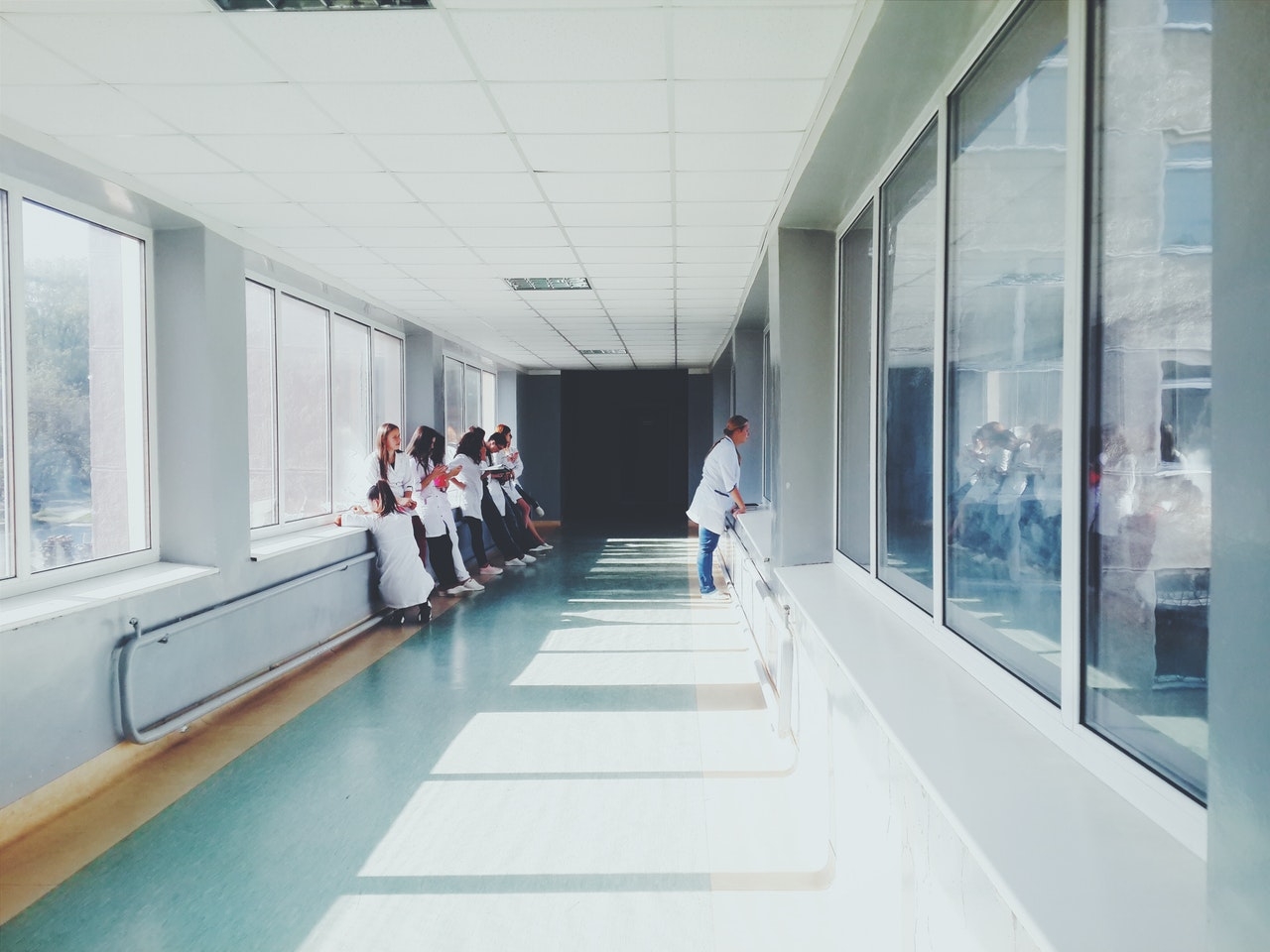 Is Blockchain the Answer to Healthcare Interoperability?

With the meteoric rise (and dramatic fall) of Bitcoin, cryptocurrencies are now part of mainstream conversation. Blockchain, the underlying technology behind Bitcoin, is being touted as the ultimate solution to sharing, security, and transparency problems – often compared to what the Internet did for communications. But can blockchain solve interoperability in healthcare?

The inability to share and act on data across the healthcare ecosystem has been a problem for decades – and private, public, and government entities have been trying to solve it to no avail. While the criticality of data sharing in healthcare is widely recognized, the most recent KLAS report on interoperability showed that 86 percent of providers still have not achieved deep interoperability. Many vendors continue to implement interoperability protocols that work exclusively within their ecosystems – building walls around their data assets. Even for vendors that want to push the industry forward, it is often prohibitively expensive to lead the charge in supporting a common protocol or develop an open application program interface. The result is a heavily siloed ecosystem.

Blockchain may be able to alleviate the technology pain points in the following ways. 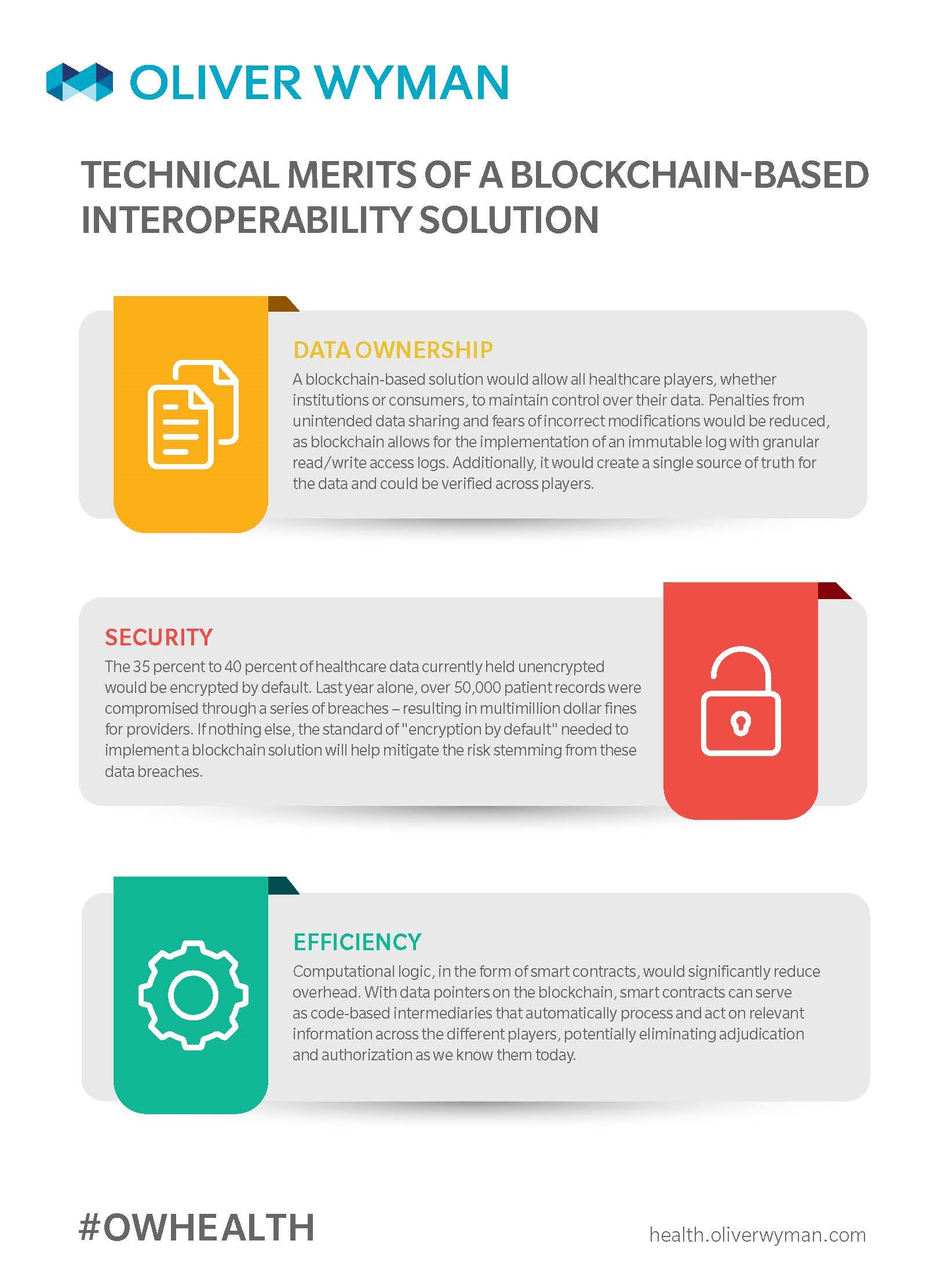 Data Ownership: A blockchain-based solution would allow all healthcare players, whether institutions or consumers, to maintain control over their data. Penalties from unintended data sharing and fears of incorrect modifications would be reduced, as blockchain allows for the implementation of an immutable log with granular read/write access logs. Additionally, it would create a single source of truth for the data and could be verified across players.

Security: The 35 percent to 40 percent of healthcare data currently held unencrypted would be encrypted by default. Last year alone, over 50,000 patient records were compromised through a series of breaches – resulting in multimillion dollar fines for providers. If nothing else, the standard of "encryption by default" needed to implement a blockchain solution will help mitigate the risk stemming from these data breaches.

Efficiency: Computational logic, in the form of smart contracts, would significantly reduce overhead. With data pointers on the blockchain, smart contracts can serve as code-based intermediaries that automatically process and act on relevant information across the different players, potentially eliminating adjudication and authorization as we know them today.

1.2. But what about governance?

Blockchain-based interoperability solutions will see limited traction (similar to today) if underlying governance issues are not addressed. Data definitions and other interoperability standards will need to be agreed upon by a majority of the industry. Fortunately, there is progress being made on this front with Meaningful Use Stage 3 and the announcement of MyHealthEData.

Additionally, the industry would need to evaluate the various blockchain-based healthcare platforms available today and coalesce around a few capable ones. Vendors like PokitDok, Change Healthcare, and Gem are starting to build out healthcare blockchain platforms. Others will emerge in time as well. A "war" between these players to shape the market will likely take place in the next three to five years. Much like the Internet needed a common Internet Protocol to allow functional mass adoption, a healthcare focused blockchain would also require common protocols. This, along with its technical merits, is how blockchain can truly move the needle on interoperability.

Although blockchain’s impact on healthcare interoperability is to be determined, industry executives are not encouraged to sit on the sidelines. At a minimum, leaders should understand the technology – and help shape it with thought leadership in these early days. Humana and UnitedHealth Group are doing just that, and have begun exploring blockchain-based healthcare solutions. Those that fail to participate early on may be left flatfooted in their response as the industry shifts. 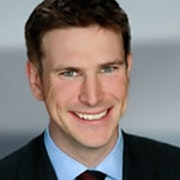 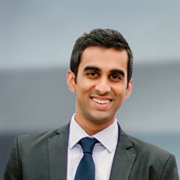