The question of how to tackle systemic risk is at the top of risk professionals’ agenda, following the shock losses produced by COVID-19, says Peter Hearn, President and CEO of Guy Carpenter & Co

This time last year, Guy Carpenter released a report titled The Changing Nature of Risk. The premise of the paper was based around the growing complexity of risk, and the opportunities and challenges confronting the re/insurance sector as it navigates one of the most significant periods of change in recent times. Although written in the context of loss accumulation, the changing climate and digitalization, events in 2020 have reinforced the key takeaways from our report: the reality of a rapidly evolving risk environment and the potential for catastrophes to become systemic in nature.

These two trends are encapsulated by the COVID-19 pandemic. Despite pandemic risk being a known threat, who could have predicted at the turn of the year that, within three months, governments worldwide would simultaneously impose quarantines, travel restrictions, business closures and a variety of other measures in an attempt to mitigate the spread of a virus?

Countries across the globe are having to deal with a lack of preparation and planning. While lockdowns have helped to flatten the curve in some countries, the economic consequences are considerable. This may not be the end of the matter, either: localized lockdowns are already being reintroduced in several countries amid a resurgence in infections. Further financial market volatility and unanticipated consequences cannot be ruled out at this stage.

The crisis has introduced significant uncertainty into the re/insurance market. Figure 1 shows how industry loss estimates for COVID-19 put forward by a number of entities compare to other major insured events, in inflation-adjusted terms. As ultimate losses are largely unknown, there is substantial variability within and between estimates for COVID-19, ranging from a low end USD 30 billion to close to USD 100 billion. COVID is unique for its significant multiline underwriting loss and its global breadth. It will be months, or even years, before claims develop fully, given the complexity of coverage disputes and potential liability consequences. 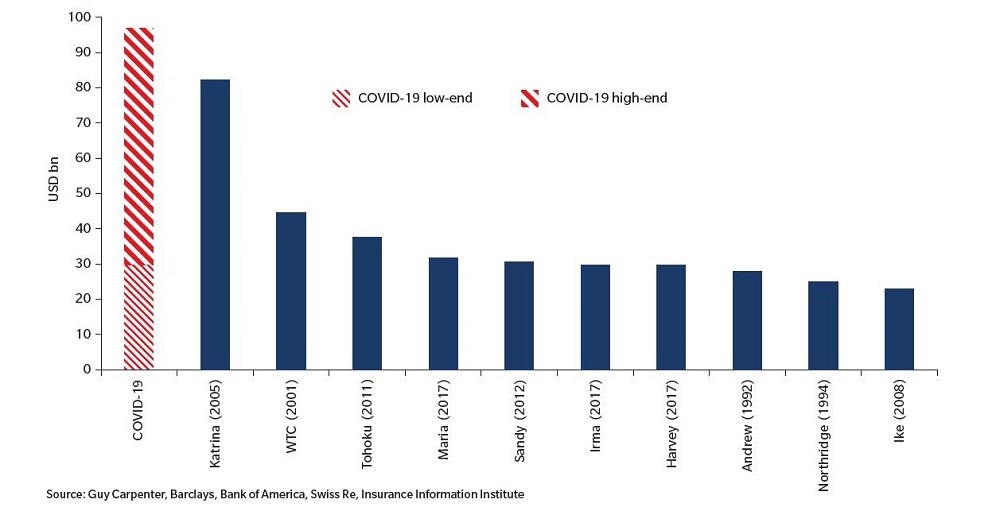 Should claims from COVID-19 settle at the higher end of current market estimates, and/or another major event occurs in the third or fourth quarters, losses could reach unprecedented levels for the full year and seriously test the limits of carriers’ capital resilience.

But even at the high end of COVID-19 loss projections, re/insurance will cover only a small fraction of the huge economic cost, which is expected to run into the trillions of dollars. COVID-19 should therefore serve as a warning to both our industry and governments about the changing nature of risk. The increasingly complex risk landscape, along with the interconnected global economy, is challenging long held assumptions around (un)correlated exposures and raising questions about the insurability of certain systemic perils.

Capital and pricing adequacy are being (and will continue to be) reassessed, as risk carriers and investors adjust their underwriting strategies and appetites in order to adapt to this new operating environment. This, however, is not a journey re/insurers can embark on alone: the sheer scale and indefinite time horizons associated with COVID-19 and other systemic risks are beyond the financial capabilities of the re/insurance sector. Although insurers and reinsurers assessed a range of pandemic scenarios pre-COVID, its unforeseen consequences have prompted most to recalibrate risk models by considering new loss scenarios and introducing exclusionary language. Guy Carpenter therefore believes that any viable, long-term solution for perils that threaten societal and economic stability require some form of government participation (more on this shortly).

Pandemics are just one example of how low probability, extreme events can cause economic (and insured) shocks. There are others: catastrophic cyber attacks, a nuclear, biological, chemical or radiological (NBCR) terrorist attack and even climate change are capable of bringing consequences that challenge (or call into question) the provision of re/insurance.

The insurability of systemic risk is going to be one of the defining issues of the next decade for the sector. Rapid technological changes, digitalization in particular, have already transformed the characteristics of risks assumed by the re/insurance market. COVID-19 will only accelerate these trends.

We are now living in the age of intangibles, with risks becoming more insidious and pervasive. Today, some 90% of the S&P 500’s market capitalization is intangible – whether data, intellectual property, brand and the like. This massive shift presents challenges but also exciting opportunities for re/insurance. Cyber is a working example of how the risk transfer sector is capable of responding to transformative developments, and it provides a glimpse into the growth potential on offer as new risk pools emerge.

There are nevertheless concerns that a catastrophic cyber event carries systemic risk that could result in hundreds of thousands of simultaneous claims. Cyber catastrophes such as a cloud service provider failure or targeted attacks on power grids pose theoretical, but real, threats to the re/insurance sector due to high risk aggregation.

Guy Carpenter and CyberCube last year estimated that a long-lasting outage at a leading cloud service provider could cost the standalone U.S. cyber market alone close to USD 15 billion. The loss potential from a power grid attack is equally stark. A London Market study carried out in 2017 simulated a scenario where households and businesses in 15 U.S. states suffer blackouts lasting several days, resulting in power outages to 93 million people and causing estimated insured losses of at least USD 45 billion across multiple lines of business.

Catastrophic cyber attacks and pandemics share a common characteristic in that they present threats with the potential for no geographical boundaries. This trait removes the certainty of diversification and makes both perils difficult to model and price. They also bring elevated correlations with financial markets, raising the prospect of simultaneous shocks to the underwriting and asset sides of balance sheets, as demonstrated by COVID-19. Trends around globalization and digitalization exacerbate the impact by creating interconnected vulnerabilities that transcend sectors and regions and escalate accumulations.

This challenges the whole provision of insurance, and reinforces the need for state involvement in finding sustainable solutions for complex systemic risks. Discussions to address this issue are ongoing in several countries but regional or global cooperation should also be explored longer-term to reflect multinational companies’ cross-country exposures and the borderless nature of the risk.

This is not to say that re/insurers should pull back entirely. There is a crucial role for the private market to play as key stakeholders, including policyholders, re/insurers and governments, come together to develop response mechanisms for future events. Clearly, government-led backstops will be required for the more catastrophic loss scenarios, but it should fall to private risk carriers to offer accessible and affordable coverage around these facilities.

There are precedents for these situations. The public-private partnership model is one that has worked particularly well for more established risks that are capable of causing systemic economic shocks. The terrorism market serves as a fine example of how the security of central government backing can mitigate the withdrawal of re/insurance capacity following significant events and facilitate the growth of a private market that is both resilient and innovative.

Several pools around the world provide backstops for terrorism events, particularly for perils where systemic risks lie. This has largely been their purpose since their respective creations, and governmental involvement remains imperative, given that private market capacity alone is not sufficient to cover (for example) catastrophic NBCR events in large cities. The modeled loss of USD 800 billion for a nuclear bomb detonation in New York City is testament to this.

Certain pools have gone even further recently and taken bold steps to narrow protection gaps by extending coverages to include new risks such as cyber. Over time, this is likely to stimulate further competition in the private market and increase the supply of new forms of cover.

Calm before the systemic storm?

This is a model the re/insurance sector could follow for pandemics and other systemic perils more generally. Such agility may be needed for major natural catastrophes, as trends associated with climate change and globalization combine to complicate and enhance the magnitude and scope of loss potential.

The diverse and dispersed events over the last three years show that carriers and governments need to be prepared for higher levels of catastrophe loss potential in the future, as climate change and the continued appeal of living in areas exposed to weather-related risks influence the frequency and severity of events.

Impacts will inevitably be amplified in the event of a “super nat cat”. What would the consequences be if a powerful earthquake or a major hurricane or typhoon were to strike near a global manufacturing hub today? Should we expect (unmodeled) national or even global ramifications that could potentially disrupt supply chains, hit financial markets and lead to business interruption or higher unemployment far beyond the point of occurrence?

COVID-19 has offered a first look into the sheer scale of systemic perils. As the risk landscapes continues to shift, there is an opportunity, indeed an imperative, for governments and the risk transfer sector to find new means to collaborate. By leveraging risk management and risk transfer expertise, this partnership can help communities build greater resilience and recover more quickly when the unexpected happens.

Important progress has already been made, with Marsh & McLennan Companies and other industry leaders at the forefront of conversations worldwide to create forward-looking solutions. A spectrum of risk pooling models has been proposed, ranging from limited private partnerships to pure state-financed solutions. Perhaps an optimal landing point would be a combination of these two extremes, so that all key stakeholders have ‘skin in the game’.

Conversations are further advanced in counties where government pools already exist, given the enhanced appreciation of the role public-private partnerships play in supporting financial resilience. As the biggest global intermediary with access points across the re/insurance value chain, Marsh & McLennan Companies sees it as our responsibility to take a leading role of engagement, and we will be a passionate advocate for any initiative that helps build resilience and provides coverage clarity to businesses.

The risk transfer sector often does itself a disservice in failing to communicate the huge value of re/insurance, and I feel this unprecedented period of risk transition is actually an opportunity to demonstrate the benefits our industry brings to societies. The level of sophistication and expertise developed over decades of dealing with major catastrophes puts our industry in an unrivaled position to drive the agenda and strengthen economic resilience. Marsh & McLennan Companies and Guy Carpenter look forward to working with governments and markets to do just that.