As the COVID-19 health emergency continues, understanding the broader economic and societal consequences is critical to navigating the unfolding crisis and eventual recovery.

Results from the World Economic Forum’s 2020 Executive Opinion Survey  highlight front-of-mind concerns regarding the global pandemic, but also offer insights into how business leaders globally are perceiving the ramifications of the crisis for local economies and societies.

To no surprise, “spread of infectious diseases” rose up the rankings, from bottom of the table in 2019 to being considered second among global business risks. The other Top 10 risks remained relatively similar to last year’s rankings, with “failure of critical infrastructure” the top-order risk that slipped in concern most noticeably, dropping five places to fourteenth. “Unemployment and underemployment” ranked as the number one concern globally, one of the many risks which takes on a new significance in a COVID-19 impacted world. 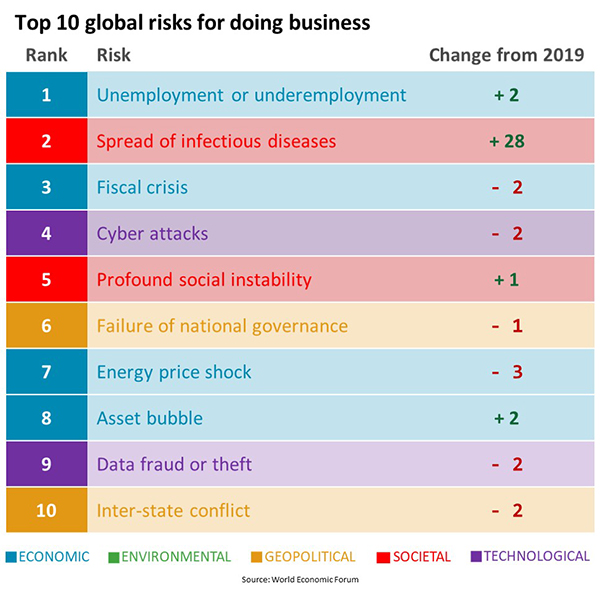 “Unemployment and underemployment” have ranked as the number one risk in emerging markets since 2016, but now also rank as the top concern in advanced economies. This rise reveals the fragility of past employment rates and the precarious nature of those jobs under a range of lockdown and economic recovery scenarios.

The threat of “cyber-attacks” is also considered a key risk in both market types. A top ranked risk in the advanced economies for several years, it entered the Top 10 for the emerging market bloc in 2020. “Misuse of technologies” also rose five spots among emerging market concerns from 2019 to rank fourteenth in 2020.

Environmental risks were the biggest movers in emerging markets, aside from “spread of infectious diseases”. The risks of “natural catastrophes” moved up seventeen places, while “biodiversity loss and ecosystem collapse” and “extreme weather events” moved up eleven and ten spots respectively. Unfortunately, this rise can often be tied to countries having suffered a significant disaster in the last twelve months.

While advanced economies similarly saw a rise in concern for environmental risks, economic and technological risks completed the Top 5. Reflecting rising civil unrest on the streets of many of the world’s cities, along with the stark differences in health and economic outcomes laid bare by COVID-19, societal risks were some of the biggest movers in 2020. “Profound social instability” propelled ten places higher to reach ninth this year.

Select a market type to explore:

Open the boxes below to explore regional and country-level concerns. Country-level data can be found on the World Economic Forum’s Regional Risks for Doing Business interactive map.

Regional risks are calculated based on a weighting considering population and GDP1.

1. Risk ranking for a country is done by ranking the number of times a specific risk was named as one of the top five risks for doing business in the 10-year horizon across all respondents. Regional risk ranking is calculated by a weighted average of the country results, using a nation’s GDP and population to reduce bias.

The economic fallout from COVID-19 significantly influenced the top concerns for executives in the region. In the United States, “asset bubble” and “unemployment or underemployment” jumped up the ranks and joined “fiscal crises” as a Top 10 risk for businesses in the region as a whole. In Canada, “unemployment” and “fiscal crisis” rose in the rankings from outside the Top 15 in 2019 to the Top 5 in 2020. Additionally, increased digital dependency reinforced the prioritization of technology risks in both countries.

As priorities shift due to the impacts of the pandemic, geopolitical risks were less of a worry for businesses in the region in 2020. Environmental concerns also witnessed an overall drop in the region, though continue to be a priority in Canada, where three environmental risks remained in the Top 10 with “failure of climate adaptation” ranking as the highest at sixth.

No doubt influenced by recent social movements particularly with respect to racial inequality, social instability became a new top concern for executives in the United States. The risk was ranked fifth in 2020, up from nineteenth in the previous year. 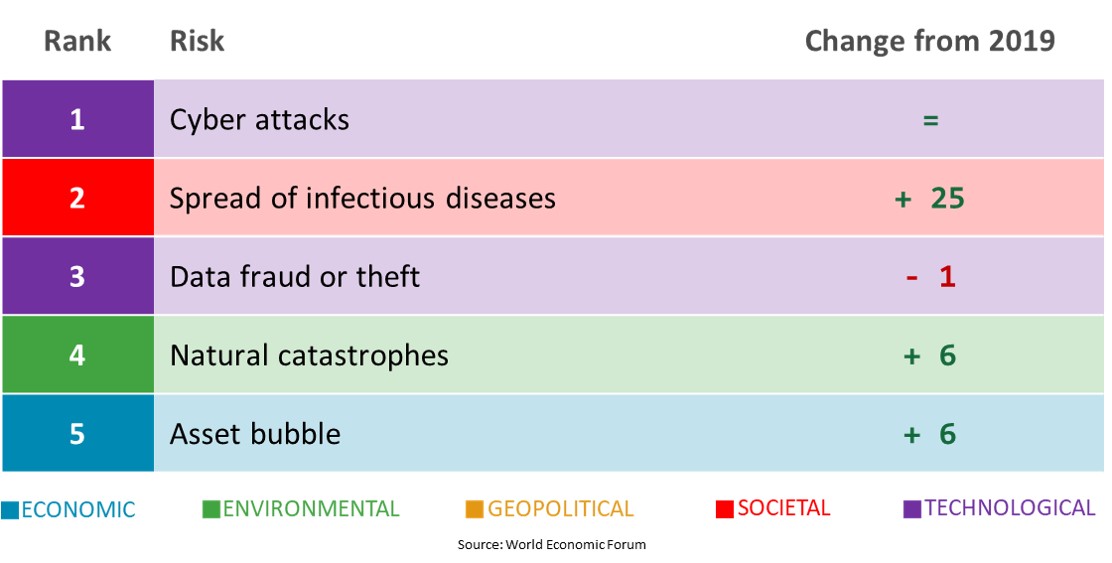 The risk of “failure of national governance” tops the rankings for the third year in a row. Related risks such as “state collapse or crisis” and “illicit trade” also feature prominently among the top risks across countries, with Bolivia reporting both risks in the Top 3.

The impacts of COVID-19 have been seriously felt by many countries in the region and have exacerbated existing tensions. “Unemployment and underemployment” have risen to become the most important risk for executives in Brazil – a nation facing one of the highest COVID-19 related cases and fatalities in the world. Similarly, the risk also entered the Top 5 in Mexico. 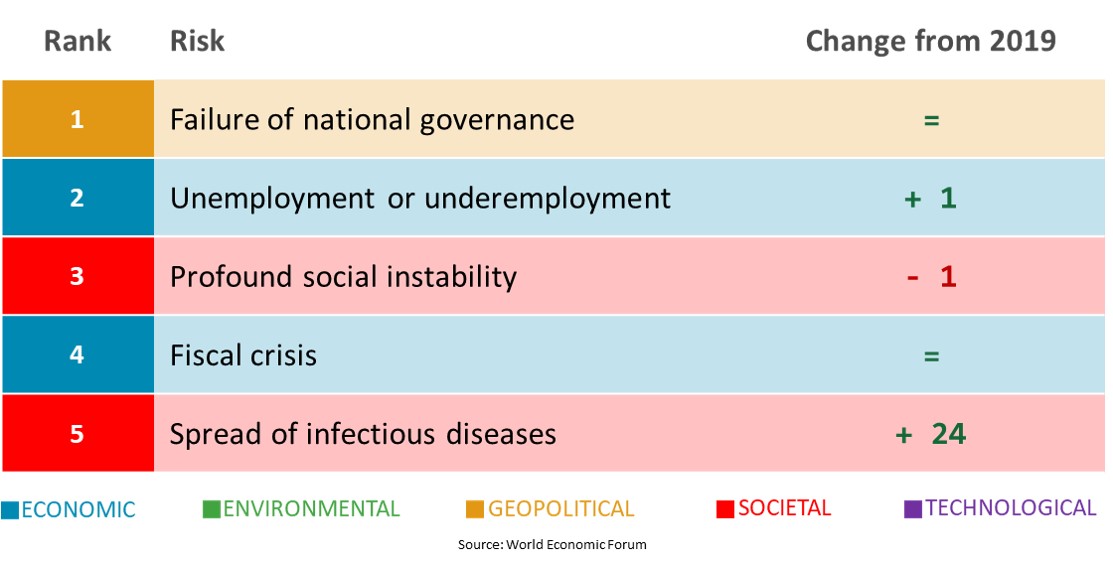 Top risks in Europe remain primarily economic and technological in nature, with “the spread of infectious diseases” presenting a new challenge for businesses. The pandemic has made existing concerns such as social instability (Gilets Jaunes movements in France) and high rates of unemployment (Spain) more complex.

More countries (Turkey, for example) joined major Western European economies in viewing cyber risks as a priority area for businesses. While geopolitical risks dropped in the rankings, the “failure of national governance” remained an important concern for executives. In Italy, where the national government resigned in the past year, the risk jumped to second in the rankings in 2020 from being outside the Top 20 in 2019.

Conversely, environmental risks gained significant ground. In the United Kingdom, for example, “extreme weather events” rose to become the third most important risk after a year in which the country faced its worst heatwave, followed by flash floods and thunderstorms. In Europe as a whole, “failure of climate change adaptation” entered the Top 10. 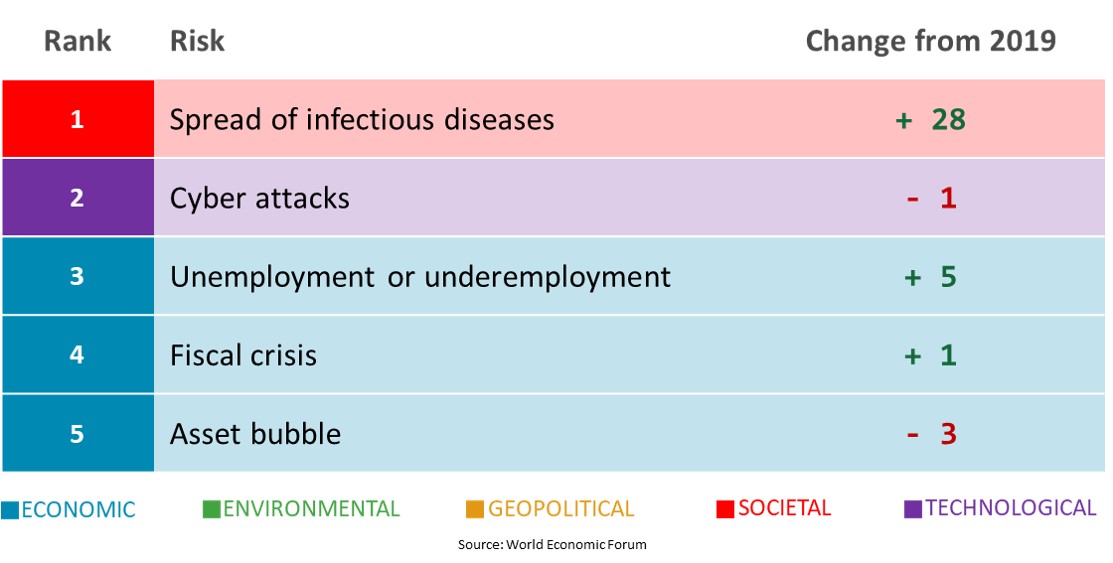 The regional risk landscape in Sub-Saharan Africa continues to be dominated by economic vulnerabilities. The top risks remained unchanged in the region, except for the risk of “spread of infectious diseases” which rose by twenty-four positions to fifth. “Unemployment or underemployment” was considered the most serious risk for executives in the largest economies of the region including Nigeria, Kenya, and South Africa.

The pandemic has intensified the existing food crisis in the region, especially in East and South Africa. National lockdowns, coupled with the outbreak of desert locusts and drought, has led to acute shortages of food. The risk is now ranked in the Top 10 by executives.

Importantly, technology risks also rose in significance. “Cyber attacks” and “data fraud or theft” moved up in rankings and are now two of the Top 10 risks – an important acknowledgment from a region that has otherwise lagged with respect to cyber risk readiness. 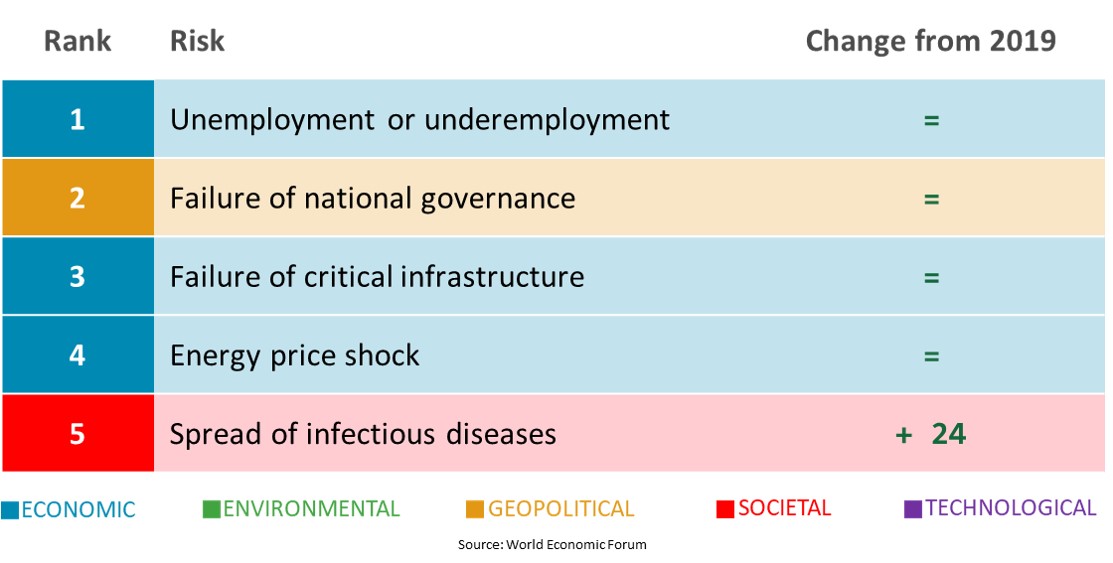 Apart from the expected rise in the risk of “spread of infectious diseases”, technological risks also gained traction. “Cyber attacks” increased by three spots to become the fifth most serious concern, and was joined in the Top 10 by the risk of the “misuse of technologies” – a growing recognition similar to other major markets. “Cyber attacks” ranked in the Top 3 for major economies such as the UAE, Israel, and Saudi Arabia. 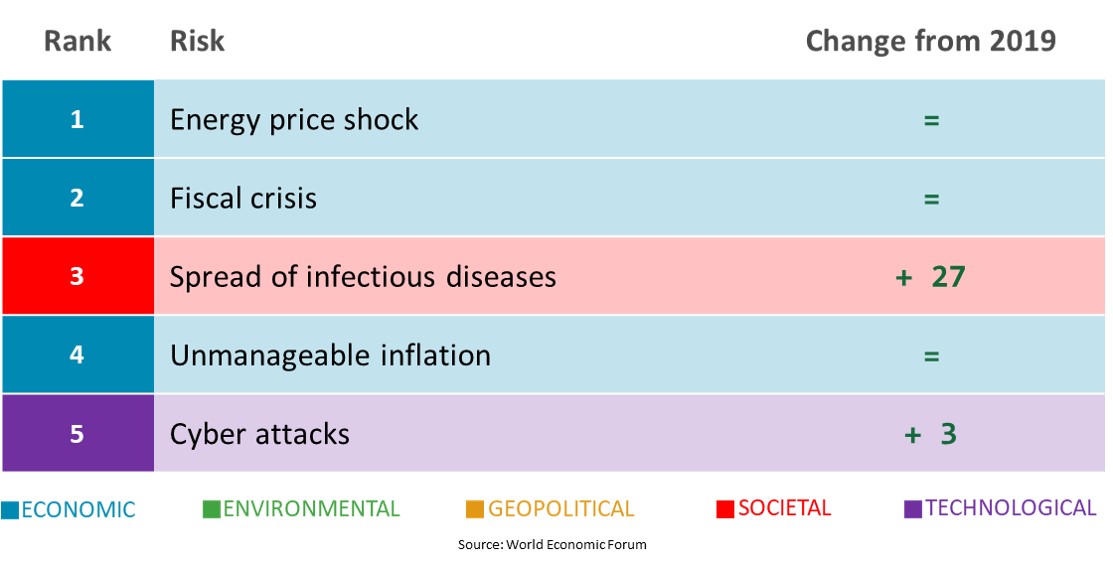 Political tensions and the ensuing societal impacts have exacerbated unease for businesses in Eurasia. Unlike in other regions, technological and environmental concerns do not feature among the top concerns for executives, with geopolitical, economic and societal risks dominating the regional risk landscape.

The risk of “state collapse or crisis” joined “inter-state conflict” and “profound social instability” in the Top 5. “Inter-state conflict” was considered the most serious risk by respondents in Armenia, Georgia, and Russia. The survey responses are consistent with current challenges faced in the region, and the regional prioritization of geopolitical risks is further consolidated by recent political instability in Belarus and the sharpening of the conflict between Armenia and Azerbaijan.

However, regional overviews can obscure acute national priorities. For example, “water crisis” has become an important concern for executives in Ukraine (up thirteen positions to fourth in 2020). The nation has struggled with water scarcity due to a dry fall and early spring drought season. 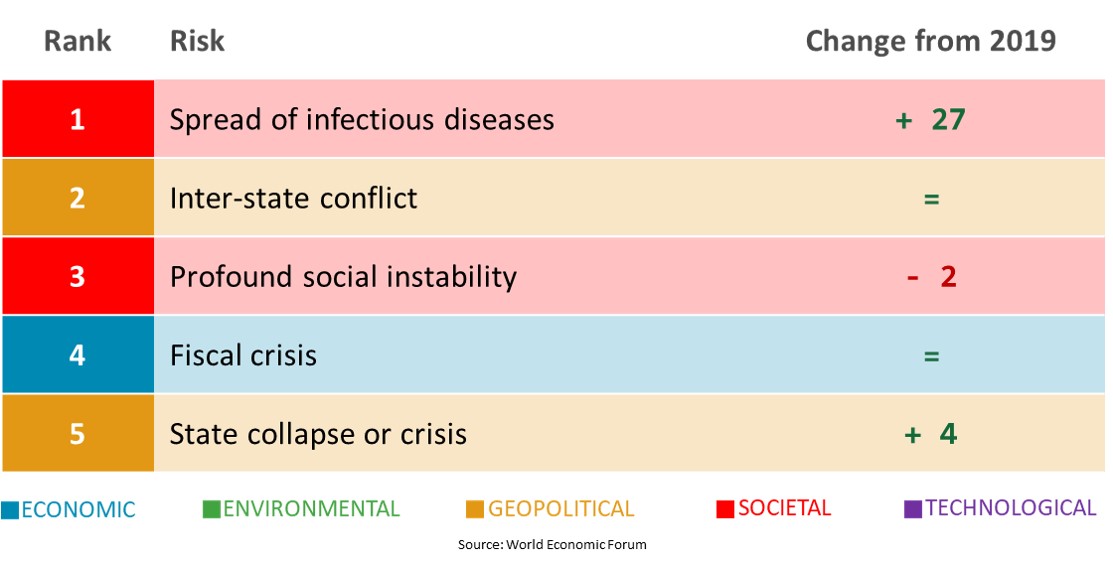 Economic and technological risks continued to rank highly in region, particularly “asset bubble”, which was ranked first by respondents from China. “Inter-state conflict” also remains a top concern in the region as economic and security partnerships shift and territorial disputes become more intense. 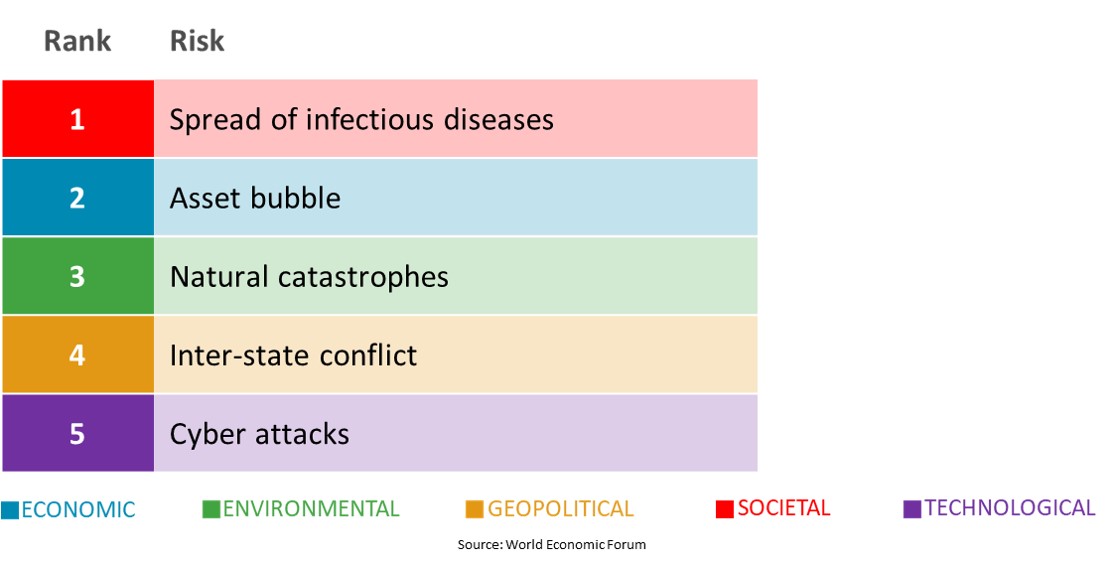 Executives in South Asia showed considerable unease about the “misuse of technologies” even as economic risks ranked highly in the region.

Although, due to survey timing reasons, the “spread of infectious diseases” does not feature among the top risk concerns of executives in India and thus the region as a whole, executives in the other countries placed the risk in the Top 10. Unemployment ranked highest in India, reflecting the country’s broader economic challenges and anticipating the fallout of the pandemic.

The risk of “profound social instability” saw a notable jump in the rankings against a backdrop of recent protests. Rising political distrust also led to “failure of national governance” being ranked as the top risk in Sri Lanka and Bangladesh and second in Nepal. 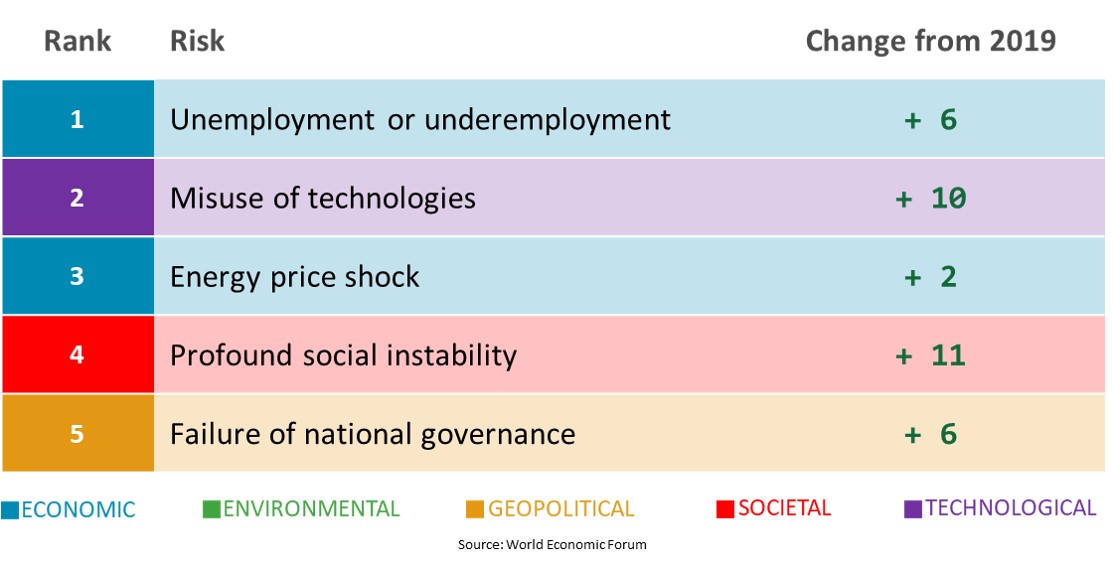 Look out for the 2021 Global Risk Report from the World Economic Forum, Marsh & McLennan and other global partners, to be launched in January 2021.